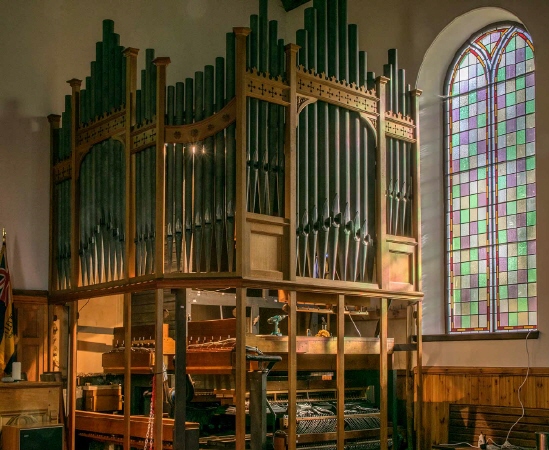 Voices from the community

Our organist Mr John Crombie had this to say on the restoration:

I took up the post of organist in July 2012 and in the four-and-a-half years until the restoration, the organ never played properly. Its performance would vary from being just ok (usually in the summer) to a condition such that it couldn’t be used (usually winter) and the piano or keyboard had to be pressed into service. Probably the most frustrating feature was its unpredictability; many notes would only play intermittently and the instrument usually deteriorated during the duration of a service. Now, following restoration, the organ is so much more satisfying to play – the full range of notes and organ colours is now available. More than once I heard the restorers comment on the high quality of the materials and workmanship in the original 1926 build and I feel the full potential and beauty of the instrument has been realised and will greatly enhance the music in the Church to the benefit of church members and the community at large.

Walcker Orgelbau of Saarbruecken, Germany was the Company we entrusted the restoration of the organ to. It was founded in 1780 in Cannstatt, a suburb of Stuttgart, by Johann Eberhard Walcker. To think Mozart was composing around this time! The Church organ working group was delighted to welcome Gerhard and Alexander Walcker-Mayer, a father and son team, to the Church in September 2016 to commence the restoration.
Seventh and eighth generation of the family firm, they set about the task of restoring the Evans and Barr organ which has been situated in the Church since 1926.
The work undertaken included photographing every part before the organ was taken apart. Couldn’t have had the question at the end “now where does this piece fit?” Cleaning, replacing damaged parts, restoring other damaged parts and tuning followed. We learned so much from Gerhard and Alexander, who were willing to share their knowledge and expertise.

The end result, AMAZING! The sound is a joy to hear. A nice footnote, both Gerhard and Alexander really enjoyed their time with us too. There was a certain amount of sadness when we said goodbye to them mid-December once the restoration was completed. However, we will be seeing both of them on a regular basis when the annual servicing of the instrument takes place.

This did mean the organ was restored in time for the Christmas services. A happy organist, a happy Minister and a happy Church family.